skip to main | skip to sidebar

1Now Adam[a] slept with his wife, Eve, and she became pregnant. When the time came, she gave birth to Cain,[b] and she said, "With the LORD's help, I have brought forth[c] a man!" 2Later she gave birth to a second son and named him Abel.
When they grew up, Abel became a shepherd, while Cain was a farmer. 3At harvesttime Cain brought to the LORD a gift of his farm produce, 4while Abel brought several choice lambs from the best of his flock. The LORD accepted Abel and his offering, 5but he did not accept Cain and his offering. This made Cain very angry and dejected.
6"Why are you so angry?" the LORD asked him. "Why do you look so dejected? 7You will be accepted if you respond in the right way. But if you refuse to respond correctly, then watch out! Sin is waiting to attack and destroy you, and you must subdue it."
8Later Cain suggested to his brother, Abel, "Let's go out into the fields."[d] And while they were there, Cain attacked and killed his brother.
9Afterward the LORD asked Cain, "Where is your brother? Where is Abel?"
"I don't know!" Cain retorted. "Am I supposed to keep track of him wherever he goes?"
10But the LORD said, "What have you done? Listen--your brother's blood cries out to me from the ground! 11You are hereby banished from the ground you have defiled with your brother's blood. 12No longer will it yield abundant crops for you, no matter how hard you work! From now on you will be a homeless fugitive on the earth, constantly wandering from place to place."
13Cain replied to the LORD, "My punishment[e] is too great for me to bear! 14You have banished me from my land and from your presence; you have made me a wandering fugitive. All who see me will try to kill me!"
15The LORD replied, "They will not kill you, for I will give seven times your punishment to anyone who does." Then the LORD put a mark on Cain to warn anyone who might try to kill him. 16So Cain left the LORD's presence and settled in the land of Nod,[f] east of Eden.
17Then Cain's wife became pregnant and gave birth to a son, and they named him Enoch. When Cain founded a city, he named it Enoch after his son.
18 Enoch was the father of[g] Irad.
Irad was the father of Mehujael.
Mehujael was the father of Methushael.
Methushael was the father of Lamech. 19Lamech married two women--Adah and Zillah. 20Adah gave birth to a baby named Jabal. He became the first of the herdsmen who live in tents. 21His brother's name was Jubal, the first musician--the inventor of the harp and flute. 22To Lamech's other wife, Zillah, was born Tubal-cain. He was the first to work with metal, forging instruments of bronze and iron. Tubal-cain had a sister named Naamah.
23One day Lamech said to Adah and Zillah, "Listen to me, my wives. I have killed a youth who attacked and wounded me. 24If anyone who kills Cain is to be punished seven times, anyone who takes revenge against me will be punished seventy-seven times!"
25Adam slept with his wife again, and she gave birth to another son. She named him Seth,[h] for she said, "God has granted me another son in place of Abel, the one Cain killed." 26When Seth grew up, he had a son and named him Enosh. It was during his lifetime that people first began to worship the LORD.

Footnotes:
Genesis 4:1 Hebrew the man.
Genesis 4:1 Cain sounds like a Hebrew term that can mean "bring forth" or "acquire."
Genesis 4:1 Or I have acquired.
Genesis 4:8 As in Samaritan Pentateuch, Greek and Syriac versions, Latin Vulgate; Masoretic Text lacks "Let's go out into the fields."
Genesis 4:13 Or My sin.
Genesis 4:16 Nod means "wandering."
Genesis 4:18 Or the ancestor of, and so throughout the verse.
Genesis 4:25 Seth probably means "granted"; the name may also mean "appointed."

From Adam to Noah

1This is the history of the descendants of Adam. When God created people,[a] he made them in the likeness of God. 2He created them male and female, and he blessed them and called them "human."[b]

Noah and the Flood

1When the human population began to grow rapidly on the earth, 2the sons of God saw the beautiful women of the human race and took any they wanted as their wives. 3Then the LORD said, "My Spirit will not put up with humans for such a long time, for they are only mortal flesh. In the future, they will live no more than 120 years." 4In those days, and even afterward, giants[a] lived on the earth, for whenever the sons of God had intercourse with human women, they gave birth to children who became the heroes mentioned in legends of old.
5Now the LORD observed the extent of the people's wickedness, and he saw that all their thoughts were consistently and totally evil. 6So the LORD was sorry he had ever made them. It broke his heart. 7And the LORD said, "I will completely wipe out this human race that I have created. Yes, and I will destroy all the animals and birds, too. I am sorry I ever made them." 8But Noah found favor with the LORD.
9This is the history of Noah and his family. Noah was a righteous man, the only blameless man living on earth at the time. He consistently followed God's will and enjoyed a close relationship with him. 10Noah had three sons: Shem, Ham, and Japheth.
11Now the earth had become corrupt in God's sight, and it was filled with violence. 12God observed all this corruption in the world, and he saw violence and depravity everywhere. 13So God said to Noah, "I have decided to destroy all living creatures, for the earth is filled with violence because of them. Yes, I will wipe them all from the face of the earth!
14"Make a boat[b] from resinous wood and seal it with tar, inside and out. Then construct decks and stalls throughout its interior. 15Make it 450 feet long, 75 feet wide, and 45 feet high.[c] 16Construct an opening all the way around the boat, 18 inches[d] below the roof. Then put three decks inside the boat--bottom, middle, and upper--and put a door in the side.
17"Look! I am about to cover the earth with a flood that will destroy every living thing. Everything on earth will die! 18But I solemnly swear to keep you safe in the boat, with your wife and your sons and their wives. 19Bring a pair of every kind of animal--a male and a female--into the boat with you to keep them alive during the flood. 20Pairs of each kind of bird and each kind of animal, large and small alike, will come to you to be kept alive. 21And remember, take enough food for your family and for all the animals."
22So Noah did everything exactly as God had commanded him. 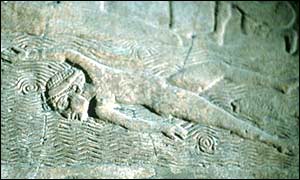